You are at:
Sunshine AssociationDid you knowMeet Siphokazi, this month’s Sunshine Superstar 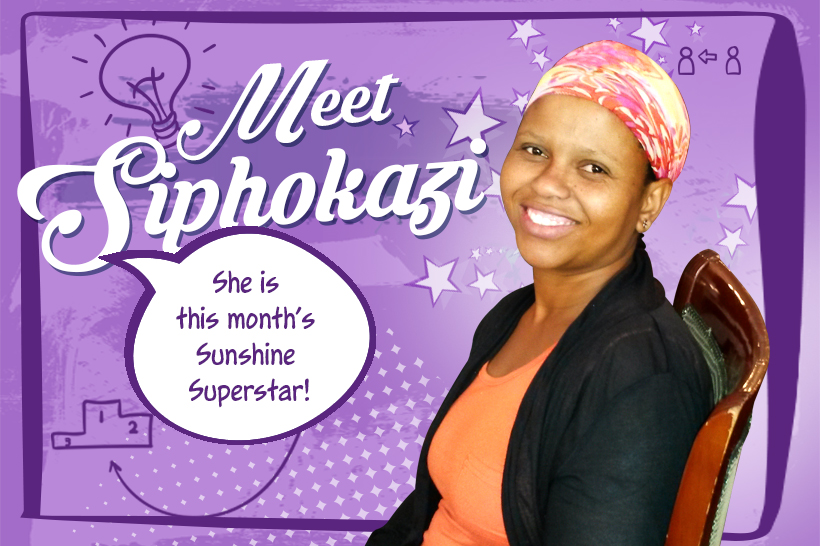 The world is filled with stories – many of them negative. We’re focusing on the positive and doing our bit to dispel negativity by celebrating the success stories of our children and our staff. They are our everyday inspiration and we are immensely proud of them!

In April 2011 Siphokazi Kwinana began working as a cleaner at Sunshine Centre Association Head Office. Before long she was helping out at reception – answering the phone when the receptionist was busy. Siphokazi’s potential and willingness to learn was so evident that the Finance Manager recruited her to assist with filling, installed a computer for her and had someone train her on it. As Siphokazi says, “She believed in me and was always telling me that by working hard I would become successful.” Time went by and sadly Sunshine Association found itself having to retrench some of its staff members. Siphokazi was on the retrenchment list.

Her positive attitude and determination to succeed rose to the fore and she enrolled on an Admin course, convinced that the qualification would stand her in good stead in the future. And it did. In February 2014 the Sunshine Centre Association awarded Siphokazi a two-year Early Child Development learnership and in March 2015 she was rehired by Sunshine as a home-based support care worker at the Elsburg Centre.

Siphokazi thrived in her role as care worker and thoroughly enjoyed providing support and hope to various families. In January 2016 she volunteered to work in Admin at the Centre and this year, on the 2nd of February, she was appointed Office Administrator. Her hard work and ambition had taken her places she never imagined.

But this is by no means the end of Siphokazi’s story – she has her sights firmly set on the next milestone, “This is just the beginning. One day I hope to be managing the company. Thank you Sunshine for believing in me. You have made my life shine!”

Speak to us today to learn more about our Sunshine Superstars and let us help your child become one of them.

Identifying and understanding Cerebral Palsy in young children July 7th, 2022 45 Years of Smiles – Celebrate with Sunshine this Spring August 18th, 2021 Affordable, immune-boosting foods for your child October 8th, 2020 Developing basic life skills during lockdown May 7th, 2020 Covid-19: All you need to know about caring for your child with special needs May 7th, 2020 Caring for children with special needs September 12th, 2019